I feel a little guilty for not posting more Thanksgiving-themed recipes this week. Thanksgiving is like the Olympics of food events and I feel like I’m not doing it justice! I had every intention of sharing something new for your Thanksgiving feast. Last week, I attempted to make pomegranate-glazed Brussels sprouts but failed. It was a good idea in concept, but the finished product was a strange brownish reddish green color and tasted pretty sour. It wasn’t pretty.

To make up for my lack turkey-inspired recipes, here are a few past recipes that would be perfect additions to your Thanksgiving dinner. Have a happy turkey day!

I had the pleasure of travelling back to my high school yesterday to compete in my third race of 2013 – the 123rd Annual Bemis-Forslund Pie Race at Northfield Mount Hermon School. The pie race is a very special event in the NMH community. The 4.5 mile race is the oldest organized footrace in the country, dating back even before the Boston Marathon. It is named for its unusual finishing prize – a freshly baked apple pie for male and female runners who finish under 33 minutes and 40 minutes, respectively. Alongside Mountain Day and the Senior-Junior Rope Pull over Shadow Lake, it’s one of the oldest traditions in the school’s rich history.

Tradition has always been important to me – it makes me feel connected to something larger than myself. Take the pie race for example: thousands, if not tens of thousands, of people have raced the same path in hopes of qualifying for a pie. The tradition brings us together across generations. It marks the passage of time and ties us to the values most important to us. NMH values the head, the hand, and the heart: which to me means expanding your world view, recognizing the value in hard work and caring for others along the way.

As a student, I didn’t have quite the same appreciation for the tradition of the race. As a fall athlete (field hockey), I was required to participate in the race and felt expected to win a pie. I ran the race three out of the four years I attended NMH (I was injured junior year) and won a pie each time. It was pretty rewarding to hold that pie at the end of the race – it was the ultimate token of bragging rights.

Because it had been so long since I had run the route (the last time I ran I was a senior in high school), I honestly didn’t know what to expect of the race. When we arrived on campus we drove what parts of the race we could. The middle portion (miles 3-4) are through the woods on a trail (more on that later), so we couldn’t get a good preview of that stretch. The race started at 3PM and we spent most of the day relaxing on campus extremely nervous for the race to begin – to come back as alums and not win pies would have been embarrassing! It was not unlike the social pressure we felt as high school students!

The first mile of the course is a gradual incline ending with a long slow stretch of downhill into the second mile. The majority of the second mile is flat, but it ends with the longest and steepest hill in the race. After that, I thought the worst was behind me. I was wrong. The next mile and a half are through the woods on an unpaved trail. There is no better way to describe this portion of the race than “off the beaten path.” I have not run on a trail since the last time I ran the pie race and have been training on the sidewalks of Boston all year. With short steep inclines and rocks to maneuver around, it was very difficult for me. It was hard to know what to expect next.

The final mile of the race is much more up my alley and takes you through a scenic portion of campus – around Shadow Lake, down Cottage Row (a line of small student dorms), around Memorial Chapel, and down a steep hill by the athletic fields. The final leg of the race is a very gradual incline to the finish line in front of the gym. Coming around the corner to Cottage Row you can hear the crowd screaming at the finish line.

I turned the corner for the last stretch and was shocked to see the time on the clock at 35 minutes. I finished somewhere around 36 minutes –by the time I crossed the finish line the time didn’t matter. I won a pie! The misery of the trail run was behind me as I was handed that beautiful, golden apple pie.

I am proud to have won a pie, but the experience really wasn’t about the race – it was about participating in a tradition with a community that I love and respect. Although many of the people who supported me throughout my time at NMH have since moved on – fellow students, teachers, coaches, and staff – the spirit of tradition and values of the head, hand, and heart are still present. What better way to celebrate than with a delicious apple pie! 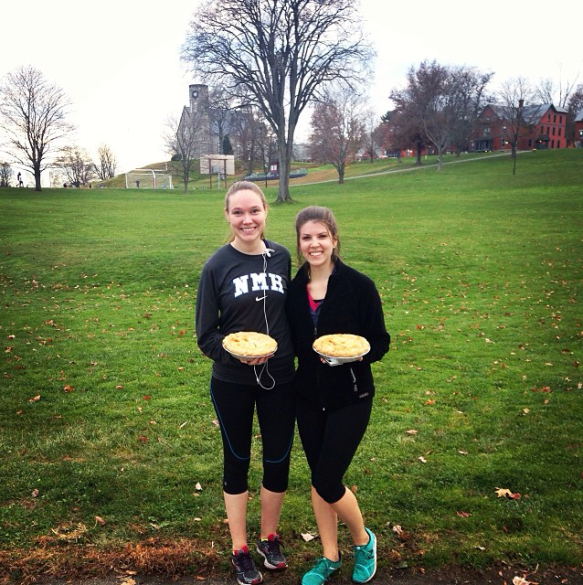 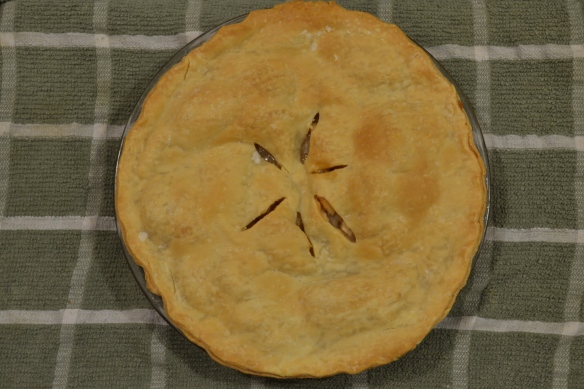 The first thing I make after apple picking is apple pie. There’s no better way to fill your kitchen with a warm, apple-y smell.  This isn’t the healthiest recipe, but it’s easy. Only four ingredients stand between you and this simple pie – just apples, white and brown sugar, and pie crust. If you went apple picking recently, give this a try. It showcases the apple’s true flavor so choose your favorite kind!

Peel and slice 6 cups of apples (approximately 6 medium apples). Mix with ½ cup sugar and put in a strainer over a bowl for half an hour. The natural apple juice will start to drain into the bowl, which will decrease your chances of ending up with soupy pie. While the apples are draining, remove 2 pie crusts from the fridge and let sit on the counter – they are easier to handle when room temperature.

Preheat the oven to 425 degrees Fahrenheit. Line the bottom of a pie pan with one of the pie crusts, centering it over the pan and letting some of the edge hang over. Layer the apples in concentric circles in the pan and arrange so that there’s a mound at the center of the pie.

Take the apple juice from the strainer and combine with 2 tablespoons brown sugar in a small saucepan. Heat over medium high heat, stirring constantly, until it starts to bubble. Let it cook until the mixture coats the back of a spoon and creates a syrup. Drizzle the syrup over the apples.

Top with pie with the other half of pie crust, pressing the top crust into the bottom crust at the edges of the pie pan. Use a knife to cut the excess crust, and pinch the pie crust into any design you’d like. Cut six long lines into the top of the crust to let steam escape. Cover the crust of the pie with strips of tin foil.

Bake for 45 minutes with the foil covering the crust. Remove from oven, take off the foil, and bake for an additional 15 minutes. Let cool for at least half an hour before serving.